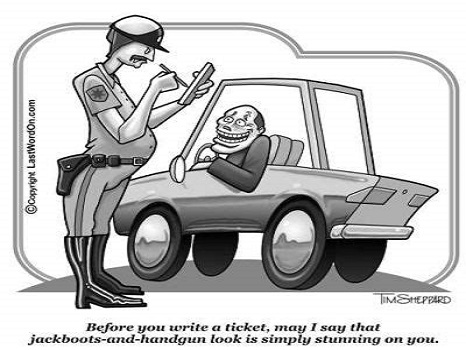 I suck at Cops. It’s not that I don’t like Cops. I do. They just don’t like me. I’d been living in a little town in Mexico and as the only Gringo in town I had a pretty good repoire with them.

The feeling of acceptance ended rather quickly after rolling through a stop sign and getting pulled over by the new town cop. It was major hoopla. Sirens wailed and lights flashed (insert- Bad Boys. Bad Boys sound track here). With overzealous exuberance he approached my VW Bus and with great gesticulation demanded license and registration. After some tense moments of looking over my documents he said:

“When you come to a stop sign in my town you need to count “Juan…..doTree” before you proceed. Understand!” Major elongated emphasis on the “Juan” and then a rapid “doTree” at the end.

“Okay.” I repeated “Si…..One…..TwoThree”. Major elongated emphasis on the One followed by a rapid TwoThree at the end.

He was pleased with my quick learning curve. My private Counting Tutor tuition was $20 and I was on my way.

About a month later the same cop at the same stop sign did the same thing, again. Same antics except this time I headed him off at the pass. He started the “Juan doTree” crap again. I reminded him he stopped me last month.

“Remember me from last month?” I said. “Remember…Juan….doTree?” “Remember?”

We both laughed and chatted for a bit. He let me go. No charge. It was the first and only time I got two for the price of one on a bribe. And, he never pulled me over again.

Lesson learned. Stop signs in Mexico can be in strange places. Even if the person in front of you blows the stop sign it’s best to count “Juan…….doTree” before you proceed until you learn which ones you can blow. If you do get busted you may be asked to escort the Officer in your vehicle to the court house or Police station to pay a fine. They don’t want to go there either so it’s a good time to ask if there is a way you can work it out on the spot. Be sure to be sincere and respectful and you’ll be fine.

If you do call their bluff and go to the Police station sometimes they will simply stop following you on the way or you actually do meet the Magistrate and plead your case. Sometimes the fine is reduced. And, as a bonus you have a good story to tell! More on that in future posts.

On a side note: I still use “Juan doTree” as my alias in Mexico. So if we meet and I introduce myself as “Juan doTree” just smile so I know that you know. Entiendo?

33 thoughts on “The Misadventures of Gringo Juan doTree”