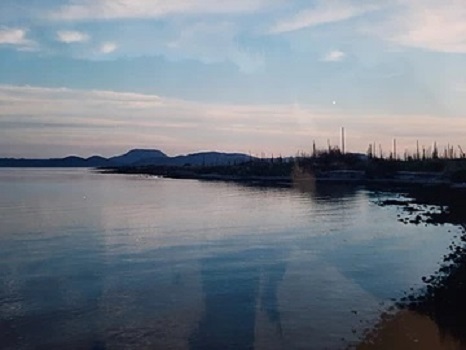 I loved my job. It was my honor and privilege to have worked for the International Marine West Wight Potter during the late ’90s as their general manager.We built a semi-custom trailerable ocean designed sailboat with roots in British ocean voyaging and it combined my love for the ocean and the need to make a living. I also love Baja California. It’s an amazingly rugged friendly and adventurous part of the world.

As much as I love building dreams for people taking the shape of a fiberglass sailboat; eventually over time I would need to break away from work and spend some “me time.” This year I decided to see if I could merge my two loves and I approached the owner of the company to see if I could take one of the demonstrator boats on my adventure. Now, I knew this was going to be a big ask. But I had a really good relationship with him and the company had been performing well and I was hoping that the owner would be pleased with that and spread a little love. I guess you could say I was feeling… really confident those days. Because when I approached him, I didn’t ask to borrow the slightly used demonstrator boat but instead I asked if I could build a custom new version and take that instead. To my surprise, he went for it.

But I had to sell the old demonstrator first which would not be a problem. So I did. From there, I got to rummage through the list of options and outfit the boat to fit our trip specifically, which was super cool. Now, the boat we built was a nineteen-foot trailer-able ocean cruiser that could sleep up to four. However, in this case with all of our gear, one or two of my friends, three people would be pushing the limits. During the construction, I outfitted the boat for an extended trip which included a small kitchen gallery ice chest for food, battery systems for lighting and the heavy-duty hull construction and trailer design that would be preferable for the rugged roads and oceans that we will be traveling on.

I had two friends in mind for this trip. The first one agreed immediately. My second friend was a little bit more difficult. He had just taken a new job right out of college… a really good job that was in line with his schooling and career objectives. When I approached him his initial response was, “brother I can’t go.. I just got this really cool job that I just started a couple of weeks ago”. My self-serving response was, “quit that job”. Not the most subtle or even compassionate response but that’s where I went. Besides boat construction, I was also a hardened and weathered salesperson so the next sales pitch came easily. “How many times does one get an opportunity to build to take a brand-new sailboat to Baja California Mexico, we’re not gonna get another chance like this again”. Yeah, selling sailing was something I was good at. A few days later, I got a phone call and in that phone call my friend responded “it’s done… I quit my job and am ready to go”. It worked! The best part of that story is that we were later to find out that upon our return, my friend was able to renegotiate his job back and on top of it he was given a raise. Sales is not just for sailboats….You gotta love it when a plan comes together. So away we go.

Bahia de Los Angeles is about halfway down the Baja Peninsula coast. It’s a beautiful little village on the Sea of Cortez in a large protected bay, strewn with tiny islands in every direction. The road down to Bahia de Los Angeles is notoriously rough and our specially designed reinforced trailer worked hard to keep it’s nuts and bolts from rattling loose as we dodged and weaved our way through the endless potholes. The Sea of Cortez is a beautiful piece of water. A turquoise sea is protected from the ocean currents by the Baja Peninsula and the Mexico mainland. Fed by a current coming up from the south and the equator. The waters are crystal clear and comfortably warm. Typically, water temps are somewhere in the 80s and the water is strewn with wildlife. Because Bay of La is more of a large lagoon than an open ocean, the sea conditions are typically very calm and absent of ocean swell. That’s not to say that can’t get rough out there. Matter of fact, there does exist an occasional hurricane during the summer months so boaters need to abre los ojos and stay aware. But the environment is an amazing place to spend time with if you keep your wits about you. The plan was to launch in the morning before the onshore windbreak would start. Like most things in Baja California, everything is beautiful but primitive. This would not be a concrete boat launch but instead, we would be backing down the trailer and the boat into the water from a sand beach, which would be a bit of a challenge considering that my truck was a two-wheel- drive Toyota pickup. But I had confidence that the firm packed sand and our adventurous spirit would get us through. Aside from the late-night storytelling and friendly banter, we were up at dawn and ready to back in the trailer and boat into the water. A hop on the boat after wading into the chest deep water, a pull on the string of the outboard… throwing it into reverse as the engine strained to drag the boat off of the trailer skids in the shallow water. We backed through the semi-calm waters to a place a little offshore…throwing out the anchor and a short swim back to shore to park the truck.

We would be gone for a number of days and the truck would be safe at camp. Crystal clear turquoise blue water and a very light breeze was the world we now found ourselves in. Climbing up on deck we hoisted the sails, tied down the dinghy and drifted slowly out to our first objective… Puerto Don Juan, a hurricane hole a few miles offshore that would make a great place to throw the hook for the night. Explored by the likes of John Steinbeck in which he wrote about is travels up and down the Baja Coast in his book “The Log from the Sea of Cortez”… this area is like something out of a Robinson Crusoe fairytale. A combination of tropical waters, cactus and sand beaches, the Sea of Cortez is a world of amazing contrast. It’s not uncommon to see an ancient Cardon cactus weighing my tons growing right up again the seafront. Referred to as elephant cactus, these giants can grow to staggering size. Sometimes as tall as 60 feet tall and adding to the unique vision that is Baja. Under sail, we drifted slowly across the bay, cautiously entering the narrow mouth of Puerto San Juan. We snugged up against the protection of this semi-circular cove and threw out a bow and stern anchor settling in for the night. Spending a little time walking up and down the beach enjoying and taking in the vibes of the area. We walked over small sand dune and approached a lagoon area that had the promise of cherrystone clams that would make a wonderful dinner later that night. Interestingly enough, that wasn’t the only thing we found. Walking along the beach was another human. To be more precise, he appeared to be a local fisherman and was all by himself and no boat in sight. Of course, you gotta make contact and find out the story behind this one. My Spanish is passable and our conversation was friendly. He immediately asked if we had any water with us as he ran out of water a day ago. We of course shared what we had with us and asked him what he was doing alone on this isolated beach. He explained that he was left on the island by his fishing partners as they were going to make their way back to town to reprovision but it had been a number of days and they hadn’t returned. He asked us where we’re from. “Southern California”, we responded. We explained that we were planning on spending a number of days exploring the islands along the coast and this was our first anchorage. We expressed our concern that he’d been out here without shelter for some time, apparently sleeping on the beach and without enough water. He looked at us and laughed. “What did he have to worry about”, he said? “Look where we are…. this beautiful amazing place”. He raised his hands to the sky and professed, “look at this wonderful ocean and beautiful sky”. “I have everything I need and everything I want”, said the man without water. Oddly enough, I can’t say that I could have argued with him. We were the ones who traveled 500 miles across the desert and the sea to get here.

Though I no longer build sailboats, my love for the sea and Baja California continues to this day. My good friend and I are still in contact and are sharing with others our appreciation for this special place. Our hope is to share our excitement of exploration and this magical landscape. I guess you could say that we are simply sharing the message from an isolated Mexican fisherman we once knew, “look at this wonderful ocean and beautiful sky, I have everything I need and everything I want”.