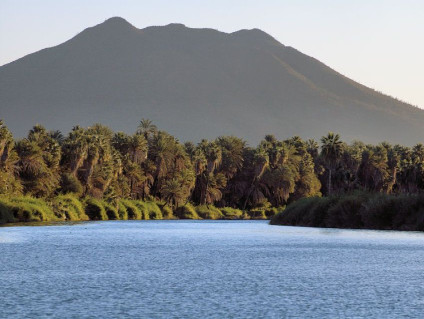 Situated five­-hundred and sixty-seven miles south along Mexican Federal Highway 1 from San Diego is the small mission pueblo of San Ignacio. A date palm strewn oasis situated on top of a natural spring that feeds one of the only two rivers in all of Baja California, the Rio San Ignacio.

With a population of a little over six-hundred, San Ignacio was constructed in 1728 by Jesuit missionary Juan Bautista Luyando and is one of the original El Camino Real settlements of the California’s.

First inhabited by the Cochimi Indians, the area is rich with history and natural wonders. Known as the starting point for the Laguna San Ignacio which flows into the Sea of Cortez, San Ignacio is a true lush tropical palm tree oasis in the desert.

Once in town plan your stay at the popular EcoTurismo Kuyima where organized whale watching tours can be had. Be sure not to miss the stunning old Spanish mission, Misión San Ignacio Kadakaamán and the quaint town square that boasts many fine restaurants for your gastrointestinal delight. As an added bonus, be sure to take in a refreshing dip in the river and sample some dates from one of the many Date palms that are abundant in the area.

If not for motor vehicles in town you would swear time in San Ignacio has stood still for decades. A true must see on any Baja excursion.